Forum for discussion relating to the Comet
Post Reply
91 posts

The keel is laid on my Comet:

By comparison with the Pz III, the Comet is not well documented. Apart from the original user handbooks, Dick Taylor has written on it with Chris Hughes' photos of the Littlefield Comet Mk I Type A:

The Tank Museum have also helped with access to their photos and extracts from the illustrated parts manual.

There are two good Comet kits, one from Bronco:

And this one from Resicast. This kit has incredible detail including a full interior:

For me, it adds so much more to the build to research and build a particular vehicle. Establishing the specific build standard, looking for variations and then getting to the in-service history all make for added interest. But with the Comet, the choice is limited by the available material.

I wanted to build a particular tank commanded by Bill Close, a very gallant 3 RTR officer who I knew, sadly no longer with us. The available information however just didn't provide enough to go on.

There is one Comet however which is well documented. It is Comet T335335 Celerity of A Squadron, Third Tanks from early 1945. This tank was driven by Trooper Dennis Pannell and his son, Dr Steve Pannell has been very helpful in sharing his extensive research.

Celerity's crew were involved in an action on the Aller River in April 1945 when 3RTR engaged a tank from Kampfgruppe Schulze. I won't go into the details here but it resulted in a Tiger being knocked out. A Google search on "Kampfgruppe Fehrmann" will provide the details. There are at least three accounts from the 3RTR side in two memoires, by Bill Close, who commanded B Sqn and John Langdon who was the troop leader of the troop in which Celerity served. The Troop Sergeant, Peter Elstob, wrote a well known novel, Warriors for the Working Day, which also recounts the action in some detail. All three books draw on the 3RTR war diary.

And here is the knocked out Tiger: 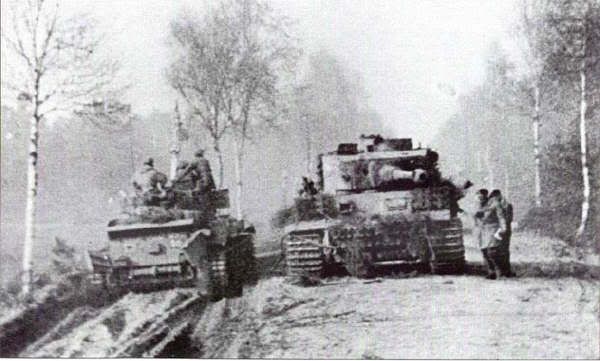 Celerity was an interesting build standard, with a mix of Type A and B features. It had a Type B hull but with blanking plates over the fishtail exhausts, the split Normandy cowls and the early idlers with tyres. They will be a challenge. With the large driver's and hull gunner's hatches, some interior detail is a must and here I'm inspired by Tim Bownman 's work.

All for now - hope it's of interest, even if most of the Comet builds are now complete.

Stephen
I guess that you have not found any original plans for the Comet in your research? Has any one got anything more detailed than the Armor Photo Gallery plans? As crucial details are hidden.
My challenge is the rear deck which needs a certain amount of modification and getting all the measurements needed may need an other visit to Bovington in the end!
All the best
Steve
Top

Looking forward to another epic build from you. Where did you get the plan drawings in the first photo. Are they available for other tanks.

Thanks. The only complete plans I've found are in the Dick Taylor book. I've had them enlarged to the correct scale. There are however some basic dimensions in the User Handbook and it will be possible to extrapolate from them.

Here is John Langdon's account of his troop's engagement with the Tiger on the River Aller, in which Dennis Pannell's vehicle Celerity was probably involved although the account doesn't give specific mention:

And here is the account from the German side:

"Franzen's "F01" which had earlier returned to Fallingbostel with the damaged
turret gear was ready to go again on April 12, and was cobbled into the hastily
formed "Kampfgruppe Grossan" along with a couple of other scrounded Tigers. It
advanced toward the Brithish near the Essel Froest after Crossing the Drebber
stream, encountering 3 Comets of 1.Troop, A Sqn, 3.Bttn.,3.RTR/11. Arm.Div. in a
firefight - destroying 1 of them and an armoured car. Both sides withdrew for
the night but the next morning the Tiger took out an APC then had an arty
barrage called in on it, so it snuck into the woods. Creeping back on to the
road again to feel out the British tanks, "F01" was hit in the left rear side
from about 100 yards by the Comet of Sgt.Harding of C Sqn. Who had moved into a
flanking position in the trees and was later to receive the Military Medal for
this action. As the Tiger began to cook off, the crew all managed to bail out
safely, though each with minor burns, and made their way back to Fallingbostel."

(Unattributed, for research purposes only)

Hi Stephen
I am just getting ready to get my Comet unpacked so will be following this thread
as well.
What persentage did you need to enlarge the plan from the book to make it 1:6 scale.
It would be very useful if you know.

Hi Derek, good to think I'm not on my own in Comet land.

The maths beats me but the figures do work.

Hi Stephen
I like the research that you do at makes great reading and study.
There is going to be some great Comets to follow with yours and the other Guys
commencing their builds.

I took your advice at the open day and I found the cap badge I need,Its the
Mounted Knight "The Thane of Fife" and for the 2nd Fife and Forfar Yeomanry it was
worn on a square of Ancient Hunting Mcintosh Tartan.
But the article said the 2nd Fife had the Black Beret from 1924 to 1956.

Steven,
Very interesting history. Thanks for the photos and battle history of the Comets against the Tiger. I've seen a couple of those photos from the Restayn books, but never much about the human story and the nuts and bolts details. This is great stuff, thanks for sharing it. I'm sure your Comet will be a masterpiece just like the Pz III. I'm looking forward to seeing what you do with it!
Best regards,
Bob
Top

Rear ones OK - spot on size and shape:

Front ones check out with photos:

But there's a problem, they don't check out with wartime drawings:

And there is evidence of a different pattern on the early vehicles, with an extra lug on the top:

(Also noticed that the driver's mudguard must have been replace with a field repair. There is an account of nearly all of A Sqn getting bogged in after the Aller engagement and the mudguard may well have been ripped off during revcovery).

The first vehicles off the production line had a chamfer to the top rear hull, inherited from the Cromwell. It shows up on the June 44 stowage plans (long before service release) and on photos of an early production tank:

When the vehicles entered service, it was apparent that the Meteor exhausts spewed hot gases and flames up through the rear decks. This not only gave the tank away at night but was also a disincentive to infantry riding on the decks. The so called Normandy cowls were borrowed from the Cromwell. But these needed a flush horizontal surface on which to mount them. If you look closely at early Comets, such as the Littlefield vehicle, a welded section was added and shows up as a weld line:

So what? Well, Celerity was built by Leyland in late 1944 as one of the first contract of 825 (of which only 610 were built). It is relatively early in the production run and on the remaining photos, the weld line could be present, although it is difficult to discern. Hulls with this modification may also be associated with the fishtail exhaust blanking plates only having five bolts rather than the usual six:

So, on the plus side, I've discovered a lot more about Comet than I knew this morning. This is not going to be a quick build but that's a good thing (or not if the next kit release from Gill and Mark is something interesting.......)

It turns out there were two standards of front towing bracket and I'm grateful to Dr Steve Pannell and Dick Taylor for the explanation. The following photos (via Peter Brown) from an original War Office show the problem. The original towing brackets were also intended to provide anchor points for lifting the tank but in trials, the lifting cables fouled the rear turret bin:

New brackets were introduced on either side of the front crew hatches to provide alternative lifting eyes - these are the signature Comet "wings":

Celerity had both sorts of lifting eye fitted. it seems that the front towing brackets were only modified late in the production run.

So here are my modified brackets:

And here the first steps in texturing using a wire disk. Second stage will be to use Upol High 5 high build primer on which I'm going to try a small sandblaster as has been suggested:

Comet armour has quite a lot of texture. My usual method of wire brush and burr was not producting the right pattern. I've taken the technique on a couple of stages. Stage two is to coat the piece with two full coats of Upol High 5. This is a high build primer which dries quickly and builds up a good thickness. I then used a mini sandblaster to erode the patterns. One note of caution, the Upol dries very hard indeed and I found that for the sandblaster was only effective before the filler had fully hardened. If you leave it too long, a burr has to be used. Results:

On with hull assembly. I must compliment Gill and Mark, this kit goes together superbly. The Pz III needed a bit of fitting but the Comet is spot on.:

Hi Stephen
That Texture work on your Hull Plate looks realy good.
I had recently bought the same air eraser to use on some of my T34 Parts,did
you use the aluminium oxide or sand

I used the Alu oxide. It worked well but once the Upol had hardened off, the tool wouldn't touch it. So for the next plates, I'll try smaller patches and get the blasting done sooner. I revved my compressor up to 40 psi but the tool can go higher so maybe a higher pressure next time too. It would be good to get feedback from anyone else who's used one.

Not a tank I am very familiar with but knowing how good this thread(and build) of yours will be, I'm sure I'll learn all about the Comet. You have set your own bar extremely high with your Panzer III and I look forward to seeing this one come together.

Watching with much interest.